Sho Mikagami (三上 翔, Mikagami Sho), best known as his hero alias Danzaiver (ダンザイバー), is one of the playable characters in Evil Zone.

Hailing from Planet Izanda, Sho Mikagami joined the All Galactic Defense System, and was assigned as the special inspector in charge of secretly defending the Earth and surrounding area. This is no easy job, because Earth is threatened by the evil organization Cryos (short for "Cry of Chaos") and their mysterious, tyrannical leader Gillaclva. Using their fearsome Meikigai biological weapon, Cryos creates hordes of monsters-of-the-week from hapless people, animals and vegetation. How can one man, Sho Mikagami, hope to stop them? Perhaps he couldn't. Perhaps no one man could. But DANZAIVER can!

Sho was well-outfitted for his job. The foremost of his weapons is the Tactical Frame, the suit of battle armour he is bonded to and can call to him with the magical word "Zerochaku!" (he chose this word himself, but its significance is unknown). With the Danzai-Blade and his gun Vicetriver, he would already be a formidible foe. But he also has access to his space ship, the tactical carrier Seingreed. Aside from communications, scanners, teleportation and all sorts of other exciting capabilities, Seingreed can deploy the satellite weapon Geiborg, which in turn can use the devastating orbital laser Seingbraze!

He is also accompanied by the twin sisters, Yuri (subservient nice girl) and Ruri (hot-tempered girl), who are in charge of search operations and attack reinforcements from Seingreed, respectively. Obviously, they both love Sho. Obviously, he is oblivious to this. Obviously, Ruri hits him a lot. You know the score.

Danzaiver, his satellite, and the two girls onboard were presumably drawn along by Alty's spell to I-Praseru. However, Yuri had previously been trapped in the Evil Zone by an unscrupulous magician in Finistere Kingdom in order to empower the magical confinement area, thus forcing Sho's hand: he would have to set forth to defeat the fearsome villain, Ihadulca, and rescue Yuri!

And then get back home, so he can play video games again, his true love.

Sho appears to have a short spiked dark brown hair with a full fringe on his head and black eyes. He wears an aqua blue leather short jacket with a red shoulder holster at the back of his jacket and has white folded sleeves on his jacket which is just below his elbows and an extended collar. Underneath, is a short sleeved dark blue undershirt, blue gray denim pants with a white belt to his waist with a orange round buckle at the center of his belt and white and orange sneakers. He also has a All Galactic Defense System emblem on the left sleeve of his jacket and wears red fingerless gloves with a white and black transformation bracelet where he transforms as Danzaiver.

In his ending where he saves Yuri from Ihadulca, he was seen in shirtless and later covers his aqua blue leather jacket in both of his shoulders after being beaten by Ruri after Yuri tells Ruri about Sho's intentions after he rescues her.

As Danzaiver, he wears a red and gray metal suit of armor with blue in the center of his chest and wears a red, blue and yellow sentai helmet to conceal his identity and has a gun holster where he shoots his laser gun on his opponent from his metal suit. When in battle damage, his helmet will be cut in half as the right half of Sho's face is shown on his broken sentai helmet.

His alternate appearance is his primary outfit as the color of his metal suit becomes blue and white and his helmet is blue, purple and red which has been controlled by Ruri before the fight.

His third outfit remains the same as his metal suit becomes white and silver and his helmet is white, red and yellow.

Sho is described as being a calm and yet very serious person who has a strong sense of justice. He also shows his unawareness towards both girls, Yuri and Ruri who are in love with him. He is also being stubborn and upbeat after revealing to Ruri while fighting against his opponents in his injured state as Danzaiver and he states that it was just a scratch and later in his ending where he was beaten by Ruri after both girls are in a friendly terms whether it was their happy ending or not.

As Danzaiver, he is a law abiding and a very serious individual which he is determined to save innocent lives including Yuri and is dedicated to fight crime and it's evil organizations especially Ihadulca as Gillaclva. He is also treating his opponents in a fair fight and also gives them some advice with compassion and respect (such as Alty) after he defeats them and later Gally in his story. Sho's intentions are both righteous and virtue in nature.

Like most of the Metal Hero protagonists of the series, Sho's abilities are demonstrated in his transformed state as Danzaiver. He is an exceptional swordsman who takes down his opponents in every strike and also can heavily defeats them with a single strike of his sword as well as he can shoot laser firearms at his disposal. He can also summon a space satellite to create a orbital laser to hit his opponent for a heavy damage as one of his capture moves.

All of Danzaiver's moves are based on the other protagonists of the Metal Hero series as most of his sword attacks and his drawback moves are heavily based on Space Sheriff Shaider.

Vicetriver: Danzaiver draws his gun and shoots his opponent with a laser blast.

Lightning Drive: Danzaiver shoots a bolt of lightning on his opponent.

Spiral Bomber: Danzaiver charges himself like a torpedo with a spinning sword attack on his opponent.

Danzai-Suplex: Danzaiver will execute a back suplex towards his opponent.

Houndbreak: Danzaiver rushes to his opponent palm first and stabs the opponent with his sword and slashes them on the side.

Danzai-Burst: Danzaiver creates a laser from the blade of his sword in one hand as he heavily slashes his opponent with a single strike for heavy damage. 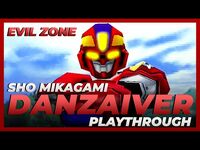 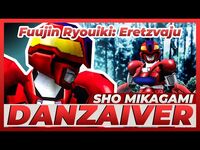 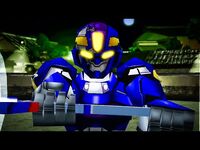 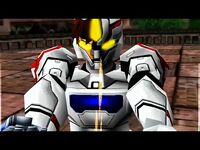