Erel Plowse is a famous mercenary in I-Praseru, sometimes called The Helper Of The Gods. Her best friend and mentor was another mercenary named Faily The Brave, and the two likely adventured together. Tragically, one day when battling a powerful werewolf, Erel was mortally wounded. Faily, also wounded, managed to defeat the werewolf, and then used her own lifeforce to save Erel's life. Alas, this proved too much for Faily and she died shortly thereafter, leaving the source of her power, the magical armour Nephilm, to her friend.

Distraught, Erel nonetheless donned the powerful armour in memory of her friend, and it remains her most treasured possession. When she isn't wearing it, the armour can be carried around as a harmless-seeming talisman. Its powers are many and mysterious, and while Erel has mastered many of them, she is unaware of its true origin: the armour was originally called Void, and was an artifact created by Kakurine to take control of its wearer and use their body as a host to kill any incarnation of Lea. Fortunately for Erel, it seems Faily's spirit continues to protect her, and her spirit prevents the armour from attempting to possess its host.

Erel's other dearest friend and companion is the court magician Alty Lazal; she has declared herself his girlfriend, and is highly unconcerned with his preferences in the matter. Fortunately, Alty seems happy with this arrangement, even if her referring to him by the nickname "Al" sometimes gets on his nerves.

Erel opposes injustice with all her heart! Also, Alty is really worried about Ihadulca. So for both reasons, and without bothering to consult with her boyfriend, she sets out to end the threat of Ihadulca once and for all. Fight, Erel! For beauty, truth, and the right to not wear a bra no matter how much you clearly need one!

Erel is a young girl with an slim hourglass figure. She has a back-length long blond hair with three long fringes and a single upper fringe of her hair which is tied in a high ponytail and blue eyes. When in battle damage, her hair is loose.

In the North American release of the game, her pink leotard is replaced with pink sleeveless body suit due to censorship reasons. (The PAL versions of the game doesn't have this change.)

Her alternate appearance is her primary outfit as her leotard is now yellow, her armor and leggings are now gray/silver and her long blond hair becomes orange. The light resembles the sword is now golden yellow and her voice strongly resembles Kakurine's.

As mentioned throughout the episodes, Erel is described as being a cheerful and a happy girl, but is also a bubbly and energetic person. As a mercenary, she is also serious and materialistic in which she can be irritated by fellow male characters due to her looks and appearance especially when she romantically stares at them from their looks as seen in her next fighting episode sequence where she stares at Keiya from his looks before fighting him in the fourth stage. She also knows Lie for being a pervert which the latter is interested in her body. (This also seen in Lie's story when he faces her in the first stage.) She is also friendly towards fellow female characters which she gave them a mutual respect for them before the fight and also became thankful to them when they give her some encouragement.

Despite this, she has a strong feelings towards Alty whom she calls him Al as his nickname while the latter annoys her from calling the nickname. This behavior also shows after she defeats Midori in a fight where she has a crush on Alty and prompts to talk to herself in a happy way about him. When she mentioned about Alty, she blushes while putting her hands in both of her cheeks due to her feelings for him and her declaration as Alty's girlfriend.

Theme Song: Be Fight! ~But I'm the Heroine~

Note: In the Japanese and PAL editions of the game, Erel wears no leggings, exposing her legs. Also in the PAL and American versions, her theme song was changed from a vocal song to an instrumental piece that resembles the English version's opening theme.

Her Japanese theme song is sung in game by Erel's voice actress, Houko Kuwashima. However, the version on the official soundtrack is sung by Masami Okui, who sung the game's Japanese opening song, Kiss In The Dark. 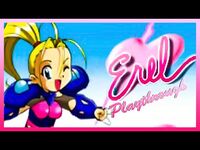