Evil Zone or Eretzvaju (封神領域エルツヴァーユ, Fūjin Ryōiki Erutsuvāyu?) is a fighting game released for the PlayStation console. It was developed by YUKE's Future Media Creators and published by Titus Software in 1999. The player can choose from ten characters to fight in several game modes including story mode, arcade mode, versus mode, practice and survival mode.

The storyline of the game tells of a being known as Ihadulca, a powerful being who can exist in multiple dimensions at one time. Through heavy cost, the inhabitants of the world of I-Praseru (Happy Island) were able to temporarily confine Ihadulca in a dimension known as Evil Zone. Now, a tournament is being held to select the strongest warrior throughout the dimensions to destroy Ihadulca before she can escape from Evil Zone and threaten the world once more.

The story mode is a unique aspect to the game and sets it apart from other fighting games. Each character has a unique story mode which progresses like an ongoing television program, complete with episode names and previews with voice acting. As the mode progresses, you learn more about the character's backstory and why they are fighting, an incentive to play through the game with each character. Evil Zone is also one of the few games to feature a fully fleshed out story mode for its boss character. EnlargeCover art from the Japanese version of Evil Zone, Eretzvaju.

The game tries to focus on simplicity with a "pick up and play" feel that isn't daunting to new players. Fighting takes place on a 3D field and allows characters to move backwards, forwards, and sidestep left and right with ease. Most of the fighting is done with range-based attacks, but it is possible to attack from a short range and use grapple moves on your opponent. The fighting system only utilizes two main buttons, attack and guard, unlike most fighters, such as the Street Fighter series.

Many characters feature attacks that have lengthy animations, which adds a more dramatic and dynamic feel to battles. A general "dramatic" encounter can occur if both characters perform a dash attack at each other at the same time. This results in an event called a Pressure Dash where both characters must rapidly hit buttons in order to gain an advantage over the other player. The most notable animations are those used for each character's ultra-attack, which can last up to 20 seconds long. These animations can become even longer when they are used as the attack that will finish the opponent.

The de facto main character of the game, Setsuna has another separate entity existing within her (how exactly is never explained). This entity is called Karin and takes the form of another girl in a translucent form that apparently only Setsuna can see. It is Karin that gives Setsuna her supernatural abilities and a sword.

Setsuna is friends with another cast member, Midori Himeno. All of Setsuna’s physical fighting moves had been taught to Setsuna by Midori. She is also acquainted with Keiya. Her blazer uniform is brought up in a few of the other character’s story modes.

Also known as Lie. Linedwell Rainrix stole a sword named Shahal from an antique shop. The sword grants him a variety of unusual abilities. It is suggested throughout the game that Shahal is an incarnation of Satan. The sword does possess Lie late on in his story. Kakurine and Ihadulca are aware of its identity.

Erel uses a special suit of armour that rests on top of her shoulders she calls Nephilm, powered by her spirit to fight. It is revealed that it was once called the armor Void, and was created by Kakurine.

Erel’s story mode has the characters she is about to fight appear in each prologue sequence in a kind of comedy sketch. Often the kind of sketch is dependent on which character she will fight.

Erel is hopelessly in love with Al and frequently acts out or ponders fantasy romance situations with him through the game.

Gally is hired to kill Ihadulca by a client. He has a large sword and a form of mechanical armour that can shoot missiles and lasers. He has a wife who appears with him during the trailer sequences for each episode in the story mode. He is apparently a keen piano player and tries to hide his drinking from his wife.

Keiya is an onmyoji who is planning to kill Ihadulca and claim her power for his own. He wishes to use it to restore what is only referred to as the ‘energy’ of his friend or lover Kimika. Kimika’s energy was apparently drained by Lie at some point in the past. Consequently, Keiya hates Lie.

Keiya’s story mode is unique in that during the trailer sequences he receives letters asking for advice. These letters are sent by the individual Keiya will fight in the next episode, each letter is often a reflection on the character that sent it. For example Gally asks how he can hide his drinking from his wife while Kakurine’s letter has no return address or postage and simply states how much she wishes to kill Ihadulca.

Midori Himeno is a passionate martial artist who is next in line to inherit her family’s dojo. She is friends with Setsuna and refers to her as Yuki. She also knows Keiya Tenpouin and despises him. Midori battles the other characters to train her attack move that she will use to become the successor to the Fuin Dojo

Special inspector Danzaiver (real name Sho Mikagami) heads to I-Praseru to release his partner Yuri from the Evil Zone. Yuri is being used to stabilise Evil Zone to contain Ihadulca. Danzaiver is supported by Yuri’s twin sister Ruri. Danzaiver is the self-proclaimed main character of the show. In his home dimension he is fighting the crime syndicate Crios headed by Galaclava, who apparently bears striking resemblance to Ihadulca. He is a parody of all the heroes in henshin hero genre most notably the Metal Hero shows like Uchuu Keiji Gavan, his name is a parody of Sho Fukimachi from the Guyver series. Famous among players for his battle cry, "The power of the Supreme Ruler destroys evil! The ultimate hero! DANZAIVER!!"

Al is a middle name given to court magicians. Although this is how Al is referred to though most of the game Al himself does not like it. Al fights using a magical formula called Lost Legacy that consists of seemingly fire based offensive spells. He is in love with Erel and enters the tournament to stop her from being hurt. Al and Erel were likely inspired by the Slayers manga and anime. He was the one who summoned most of the other characters to I-Praseru

Although she is over 10,000 years old, she looks, sounds and acts like a little girl. She has super transcendental powers. Kakurine wants to destroy Ihadulca, Lea's incarnation, in order to bring her childhood friend Lea back to one existence.

Lea's incarnation in the world of I-Praseru. Her original name was Ihadulca Il Immella, and she was a court magician in a state of I-Praseru before Lea possessed her. She was sealed away by the inhabitants of I-Praseru. Recently, she has been nearing escape from Evil Zone, therefore Alty was made to summon warriors from other dimensions to destroy her.

Each of the characters story modes is presented like anime TV series. Each character gives narration in his or her own cutscenes. Each story mode has its own series title. 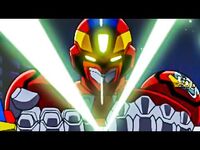 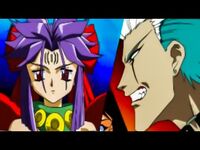 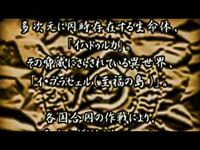 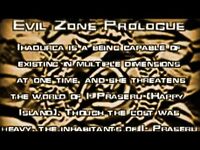