Gally "Vanish" Gregman is an infamous bounty hunter. Hailing from the technologically advanced world of Aradia, he, his giant sword Gilla Dacker, and his arsenal of weapons and special attacks with incongruous German names are known and feared throughout the cosmos. He was hired by the ruler of Evna Abraku, one of the nations of I-Praseru, to destroy Ihadulca. He has no personal stake in I-Praseru or Ihadulca - it is enough for him to know there's a price on her head. If anyone gets in his way, he'll just kick their asses and get back to the job, especially since most of them are a bunch of snot-nosed kids anyway.

Gally receives his assignments through a mysterious old man, who also introduced Gally to the woman who would become his wife, Sayaka. They have a very happy marriage, except for the fact she keeps trying to get Gally to quit drinking, forcing him to sneak out to bars when on assignment. Aside from drinking and blowing up people with missiles, Gally's hobby is playing the piano. His current side project is trying to unlock the secrets of a strange piano he ran across which supposedly can convert its owner's power into a melody; no one has yet been able to get it to play, however.

Gally is mostly notable for being one of the few non-immortal characters in the game whose given age by Titus was not obviously altered.

In his ending credits, Gally returns home to Sayaka who welcomes him back from the battle. He is later seen playing on the piano with Sayaka sitting next to him.

Gally is a tall and middle-aged bounty hunter who have a short brown hair, tanned skin and brown eyes. He also has a scar on his left cheek. In game, his hair and eyes changed to black and the scar of his left cheek is not seen.

In his alternate appearance, his armor is now black but maintains the gray part of his armor, gloves and boots, his pants changed to blue gray and his two-handed sword, Gilla Dacker is now glowing in red.

In his ending, he is not seen wearing his armor anymore after reuniting with his wife, Sayaka. He now wears a white short sleeve shirt, red pants, white socks and green slippers.

Throughout the episodes as well as other characters' episodes where he is an opponent to them, Gally is described as a stoic and a very serious person. But is also a strong and a very charismatic man as seen on his fighting episode sequence where he is portrayed as a narrator while being assisted by his wife, Sayaka about his next opponent as well as being a family man. He takes every assignments and missions due to his occupation as a bounty hunter as well as having a drinking problem who loves to booze with a lot of wine. He also loves his wife, Sayaka who wants him to quit drinking despite he was forcing to sneak out on bars due to his assignments. Especially he loves to play the piano which is the reason why he decides to find out the strange light when he plays it with the piano.

He is also shown to have a fatherly streak and has an immense respect to his opponents except Lie, Ihadulca and Keiya as seen where Gally reveals that Alty fights for Erel and knowing that he becomes a man after he defeats him as well as when he defeats Erel and knowing of his job to fight Ihadulca and giving some advice to them for being as young loving couples. Second, when he defeats Midori in a fight and she wants to fight him again as Gally expects her to improve her skills and her femininity much to her annoyance. Third is Setsuna after he defeats her. He tells her if he kills her his wife is gonna kill him (implying that he does not want to kill innocent people). He gives her an advice not to say such things if she was killed then it's all over. Fourth, is Sho/Danzaiver who gave him a fair fight with him as Gally remarks that he is a good fighter and knows him from being around when he saves others in the safe place and lastly is Kakurine which she tells him an advice to make sure Ihadulca is destroyed by him much to her relief and soon becomes confident to defeat Ihadulca after Kakurine's advice.

Gally is also a very formidable fighter with full of confidence and also knows the opponents' skill and their actions as seen when he defeats Lie for being controlled by his own sword, second when he defeats Keiya for being act as a villain after the latter created a doppelganger version of himself and lastly is Ihadulca, who despises humans making the latter to fight her for the good cause.

(Klutzy Rogue in the Japanese version)

Theme Song: Road For Oneself (Eyecatch) 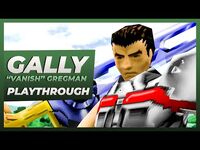