Lea was, like Kakurine, a phenomenally powerful being that existed in astral form only. Some time ago, she discovered a way by which she could enter the physical plane: by finding hosts compatible with her essence, she could incarnate herself in a human body. Because her being is impossibly vast by human standards, she could and did do this in multiple hosts; while the mind and will were all the same, each incarnation was somewhat different, as dictated by the ego of the human host.

Several years past, she inhabited the body of Ihadulca Il Imella, a court magician in I-Praseru. she shortly thereafter engaged in a reign of terror and destruction, before she was temporarily defeated by a coalition of powers and placed in the Evil Zone. However, she could not be killed by those who fought her, merely confined and barely held in place by various magical countermeasures, including a copy of herself. Even now, the bonds that hold her strain, but have not broken yet.

Much about Lea's true personality and motivations is shrouded in mystery. It is known she enjoys causing destruction in the physical plane, and still holds love in her heart for Kakurine, even as she hates and fears her for repeatedly murdering her incarnations. She fears above all "Orsa", but who or what that is is unknown, aside from the meaning of the word: "the beginning of everything".

Ihadulca's powers are vast, particularly in the realm of causing destruction. Her staff Vanalgando and the two magical spheres Bendis and Meltis that hover near her are artifacts of incredible power that let her project nearly limitless amounts of energy. As well, Ihadula is superhumanly strong, fast and durable. Though many have strive to oppose her, few can hope to withstand her might. While she fears little beyond Orsa and Kakurine, Ihadulca is seeking out the fragment of one of her previous, slain incarnations, which she can sense moving about in I-Praseru...

BLADE'S FINAL WORD: What's there to say about Ifurit - I mean, Ihadulca? She has a cool design. A skanky design, too, especially in her alternate outfit. She has cool angel wings for no real reason. She blows stuff up real good. Her English voice actress hilariously overacts. She has a cool theme song. She's a pretty decent final villain all told, who is aided particularly by the fact her possible foes all merrily beat the crap out of each other rather than attempting to team up and take her down.

And she doesn't want you to call her "Iha". Remember that. 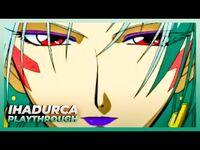 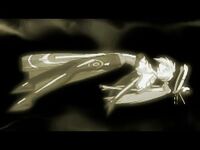