Keiya is a powerful sorcerer from the Tenpouin Clan, who have gained power through ancient Chinese yin-yang philosophies. Little is known of his early life, or the details of the incident that led him to save Midori Himeno's life. It's possible some decency and goodness lies within him, but he hides it well if so. Keiya is a ruthless man who will not hesitate for a moment to kill anyone who gets in his way, nor regret his acts afterwards.

His only friend was another sorcerer from Tenpouin clan, Himika. She was one year older than him and saw Keiya as a little brother. Linedwell Rainrix defeated her and drained her energy, leaving her comatose and near-death. Keiya is determined to exact revenge, as well as gain the power he needs to save Himika. To that end, upon being unexpectedly summoned to I-Praseru, he quickly resolves to seek out Ihadulca and take her vast power for his own. Heaven help any fool that gets in his way.

Keiya is quite a renaissance man, not only being magically potent, but also a powerful hand to hand combatant, a noh theater performer and a snappy dresser. His sorcerous abilities, among others, include being able to summon oni with spirit wards, creating entrapping magic circles, and distorting reality around his opponent to mask his movements and render his attacks undetectable before they strike. Based on yin-yang philosophy, Keiya's characteristic elements are Water, Turtle, Black, Wisdom, Yin.

Keiya has long dark brown hair with a full fringe which is pulled down in a low ponytail and black eyes. When in battle damage, his hair is loose.

As a Noh performer during the opening sequence he wears a light orange traditional Japanese kimono, matching light violet Japanese pants and white sandals as he wears a mask to conceal his face before being slashed in half to reveal the half of his face.

In his actual appearance, he wears a blue green formal suit jacket with white long sleeve button shirt underneath with a dark green neck tie on the collar, blue green pants and black shoes. In his in-game appearance like both Setsuna and Gally, Keiya's long hair changed to black and his black shoes changed to dark red.

In his alternate appearance, he retains his long dark brown hair as his formal jacket becomes dark purple, his tie changed to white and his button shirt changed to violet making his outfit in a shades of purple, his pants changed to gray but maintains his black shoes.

His third outfit, he is not seen without a formal suit jacket and he was seen wearing a purple formal vest with a white long sleeve button shirt with a red tie on the collar, he retains his blue green pants from his primary outfit and his shoes changed to brown. His long hair is now brown instead of black.

Keiya is initially described as a cool and calculated person and acts as a renaissance man. But in reality, he is a cold and a ruthless person and acts like a sociopath who does not hesitate to kill people who tries to get in his way and does not regret his own acts on his downed opponent. His own behavior sterns from his nemesis Lie who he has a strong hatred with after he attacks his close friend Himika which he made an exact revenge against him. Keiya does have a good side within him as he hides it from others due to his ruthless personality. He also does regret towards to himself after he defeats Lie in a fight as well as his friend Himika who is in her comatose state which his own motive is to get the power from Ihadulca once he defeats her. Despite his ruthless personality, he becomes good again after reuniting with Himika in his ending.

Keiya is shown to be a formidable fighter as well as being a powerful magician where he uses Japanese charms to his opponents with his Onmiyoji magics based on ancient Chinese yin-yang philosophies. He is also shown to be a powerful hand to hand combatant which he takes down his opponents in both punches and kicks as seen where he kicks his opponents as his grappling move and the other where he uses his both punches and kicks during his Black Capture move. Some of his moves at his disposal has him to entrap his/her opponent with magic circles as he chants in five elements, earth, wind, water, fire and metal and also summoning black crows and spirit wards as his special attacks as well as summoning a small demon in one of his capture moves to devour his/her opponent. Keiya also gains a strange sword stick as he forms the stick into a magical pentagon with five Japanese charms embedded on the pentagon to dispatch his foes with a laser beam from the pentagon he created.

Keiya's moves consists of hand to hand combat and the usage of several Japanese charms to execute his Onmiyoji magics due to his role as a powerful Japanese sorcerer as his chants are based on yin-yang philosophies as well as chanting different elements when summoning magic circles on his opponent.

Kageyajiri: Keiya summons a raven spirit to attack his opponent.

Akekazari: Keiya sends a stream of yellow light on his opponent.

Tempouin Three Kicks: Keiya grabs his opponent and delivers a series of two kicks on the chest and knocks his opponent with an axe kick.

Tempouin Shadow Dance: Keiya leaps over his opponent's head and he grabs their head to fling them over the ground.

The Black Capture: Keiya has a single charm to control towards his trapped opponent and taunts them before the screen fades black due to the darkness activated on his charm as he unleashes a series of both punches and kicks on his opponent in a flash of light.

Kamitsuzumi: Keiya summons his charm on his trapped opponent upon contact and the charm transforms into a small demon to devour his opponent from the inside out.

Mizukazuro: Keiya uses a strange sword stick on his right hand as he moves them in a circle forming a green pentagon with five Japanese charms embedded on the pentagon as he shoots it's laser on his opponent in a heavy damage. His second version of his finisher has him using his left hand instead of the right as a close up of Keiya's face is shown to charge his finisher to shoot a blue laser on his opponent in a critical damage and pentagon that he forms is not seen.

Story Mode: The Legend Of Tenpouin[]

BLADE'S FINAL WORD: Keiya totally has the best "next episode previews", where he pretends to be a radio self-help guru who answers letters from the characters he's going to kill next episode. Seriously. It's totally awesome. 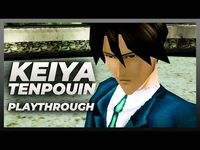 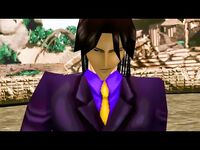