Linedwell Rainrix was a troubled British youth who really, really wanted to become a heavy metal musician. Whether he was any good at actually producing music is unknown, but he was definitely enthusiastic about embracing the "Satan-worshiping sociopath" stereotype of the heavy metal rocker. He also was unemployed, which may be have been what led to him breaking into an antique shop. A strange sword in the shop seemed to call to him, and Lie took it up, sealing his fate.

The sword is Shahal, containing the spirit of no less than Lucifer himself. His will is steadily overwhelming Linedwell's, though Lie is completely unaware of this and is in fact rather enjoying going around slaughtering people, ranting megalomanically, and crudely hitting on women. Probably because that's pretty much what he did before he got the sword, just less well.

The sword Shahal gives Lie great power, making him able to take down people that wears the thongs in the game.. With it, he can distort space and time, drain the energies of foes, summon the flames of hell, paralyze opponents with the evil power of his gaze, or just stab a lot of holes in people.

His being summoned to I-Praseru is likely no coincidence. Shahal has plans, and even though for the moment it quietly obeys its "master", that situation may well change soon...

Theme Song: Nearby The Death (Eyecatch not available yet, oddly) 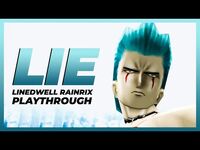