Midori Himeno (姫野みどり, Himeno Midori) is one of the playable characters in Evil Zone.

Midori Himeno is the 28th successor of the ancient Fuin school of martial arts. Originally designed as a soundless assassination style, either the school has been considerably modified over the years, or Midori is a decidedly unorthodox practitioner. A childhood friend of Setsuna, Midori's life was saved at a young age by Keiya, but neither of them was left with a very favorable impression of the other.

Shortly after developing her own personal unique fighting technique to display at the Keisho ritual to confirm her as the next successor to the school, Midori was dragged along with many other unique and powerful individuals into I-Praseru. Some people might be discomfited at this unexpected turn of events, but not Midori: a fantasy universe filled with powerful opponents who will probably kill her without hesitation is just the sort of thing that gets her martial artist's blood pumping!

BLADE'S FINAL WORD: While Evil Zone is a game of anime archetypes, it's both unexpected and cool that the Hot-Blooded Martial Artist niche is filled by a girl. No official word on whether Setsuna wants to bang her, but I'm sure the doujinshi artists didn't mind making some assumptions.

Midori's backstory with Keiya was one of the more interesting subplots in the game; it's a pity it didn't get developed more. Maybe it would have happened in the sequel. 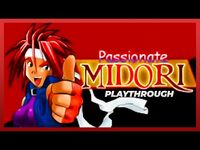