Setsuna Saizuki is a young, shy high school/college student. One day, she was approached by a mysterious being named Karin, who gave her the magical sapphire ring Lea Feil. With it, and a special chant, she can become Guardian Angel Setsuna. In this state, she carries the Sword of Flame and Light, Klau Solas, and has Karin's ghost-like image following her every move. When she is summoned into the mysterious world of I-Praseru, she immediately resolves to do her best to end the troubles there. And Karin, too, feels a strange drawing towards Ihadulca...

While on Earth, she and Karin battle against the forces of the "Dark World", and their leader Vice. (There seems to be a link between Lie's sword Shalal and Vice, involving miasma.) Setsuna is childhood friends with Midori, whose affectionate nickname for her is Yuki. Midori actually taught Setsuna several self-defense moves which she uses in the game, that from the encyclopedia entries, Setsuna was forced to learn.

The name of the school/college she attends is Mikamuro, and she's normally wearing their winter uniform (blue or brown blazers, the latter is her 2P costume), though the summer sailor suit uniform is her unlock able third outfit. As well as her sword attacks and Karin empowering her, she can summon three fairies to attack her enemies.

Setsuna's story mode reveals that Karin is a fragment of Lea, that splintered from her after one of Lea's incarnations was killed by Kakurine. However, Karin's personality is radically different from Ihadurca, and can be considered a separate entity. Lea now inhabits of the body of a court magician in I-Praseru, Ihadurca Il Imella. During the final battle, Karin is nearly absorbed into Ihadurca, but Setsuna's willpower and Karin's spirit reject the fusion. When Ihadurca is defeated, Karin disappears, despite Setsuna's tearful pleas. During her credits sequence, there are no short clips to break up the image of a floating Ihadurca, unlike every other character's ending. This may indicate Setsuna having a 'main character' status, considering Karin's tie to Ihadurca.

At the very end, we see Setsuna had finally graduated to her own school while walking through a park filled with cherry blossom trees, and she turns around. We never see who she's facing, but she tells the person "I've been waiting for you". This implies Karin somehow returned to life, possibly even in her own body.

According to the game manual, Midori Himeno is Setsuna's childhood friend who always calls her "Yuki" as heard in either Midori's story or Setsuna's depending on the player's decision.

Her most hated nemesis is Keiya Tenpouin who wanted Karin to heal his sister, Himika as both seen in either his story and in Act 3 of Guardian Angel Setsuna depending on the player's decision.

Setsuna appears as a young girl with back-length long dark brown hair with a full fringe and brown eyes.

Her primary outfit is a blue formal jacket with black folden sleeves and a pale yellow sleeveless vest and white long sleeve button shirt underneath with a red neck tie on her collar, dark blue pleated skirt with black linings, white panties underneath her skirt, white socks and brown shoes. She also wears a single red gauntlet to her left arm where she wears a sapphire ring, Lea Feil and wields the sword Klau Solas. The primary outfit that she wears is her winter school uniform.

In the English console version, her age became the same age as Midori, Erel and Sho which is 21 years old and becomes a college student instead of a high school student.

In her in-game appearance like other characters except Sho Mikagami/Danzaiver, Setsuna's hair becomes black and her uniform becomes darker and the folden sleeves and black linings on her skirt is not seen.

In her alternate appearance, her school uniform becomes brown and her white socks is replaced with red stockings.

Her third outfit is her summer school uniform, a white short sleeve sailor fuku with a aqua blue bola tie, blue pleated skirt, white socks and brown shoes. The color of her fuku is aqua blue with white linings and the edge of her sleeves of her sailor fuku is blue and white linings. She also wears a white headband on her head and her red gauntlet on her left arm is not seen.

Setsuna is described as a shy, sweet, and a very determined young girl who can protect people in harm's way including Karin although the latter tries to protect her from being killed by her opponents. She is also overprotective towards Karin when others are attempting to kill her including Ihadurca who nearly absorbs her and her nemesis, Keiya who attempts to use Karin to heal his friend, Himika who was attacked by Lie and ends up in a comatose state (This also shows in Keiya's story, Feeling). When Setsuna is controlled by Karin due to her as Lea's fragment. She gains a severe headache due to Ihadulca's control where she is close by and her behavior changes from being a sinister and evil girl who finally shows her hostility towards others as seen where she manages to defeat Alty after the latter attempts to help her to regain her normal self. This also happens in Sho's story where Sho as Danzaiver was warned by her to keep away before being controlled by it. She became close friends with her childhood friend, Midori who teaches her self-defense techniques and the latter tries to test her power and skills which she was forced to use it in her story. She is also deeply emotional after she regains herself from being controlled by Karin in Ihadulca's control and she cries in regret after she forcefully defeat Alty who tries to help her regaining her normal self from being controlled and finally when Karin disappears with Ihadulca, she cries in anguish to see her disappear until being reunited in her own body after wondering in the park, alone in her ending.

Setsuna is shown to be very skilled swordsman with her sword, Klau Solas as well as utilizing self defense techniques which she was taught by Midori. Her sword attacks are very powerful and it is also shown to throw her opponent with her sword by summoning them and is able to multiplied itself when it was activated. She can also summon three faeries to attack her opponents at the same time or two fairy projectiles as one of her special attacks. Setsuna's swordsmanship proves to be more powerful as seen when she uses one of her capture moves where she heavily stabs her opponent with her sword or her finisher where she slashes her opponent in a single strike as she multiplies herself into two to finish her opponents in three slashes. Despite this, her sword attacks and her special abilities are empowered by Karin who is controlling her in her battles.

Midori is Setsuna's childhood friend and a Fuin practitioner under her father's tutelage. She was forced to teach by Midori with several Self-Defense moves based on Fuin in order to fight her opponents as well as she is under protection by her. These movements that was taught by her are used in the game where she was seen grappling her opponent with a single throw. She also calls her affectionate nickname "Yuki" when they met each other. During Setsuna's story mode, Midori seriously tests Setsuna's power and skill as the latter is forced to use it which makes Midori to fight her by force. After Setsuna defeats her, Midori decides to follow her after seeing that Setsuna is getting stronger and no longer needs her protection and Setsuna was relieved to see her friend is very precious to her while she talks to Karin.

Keiya is Setsuna's primary enemy who wants to take Karin from her as it means to heal his close friend, Himika after she was put in comatose state by Lie. Setsuna becomes overprotective to Karin after seeing his evil intentions and his actions as a cold hearted villain as seen on his story. Although Karin also wants to protect her from being killed by him and berates Keiya not to hurt her.

Setsuna has a variety of sword attacks and she only has two Fuin self-defense techniques which she was taught by Midori. Her sword attacks and her special abilities are empowered by Karin when she executes her moves.

Revolving Attack: Setsuna performs a multiple sword attack by spinning with her sword and hitting her opponent multiple times.

Zankouran: Setsuna summons her sword to throw her opponent with a single stab if it connects. It will multiply the sword to decimate her opponent in an extensive damage. She can also use this ability to summon several swords to attack her opponents.

Fuin Wave: Setsuna flips her opponent over to their back.

Fuin Naghi: Setsuna flips her opponent over to her head in an elegant throw.

Abdomen Thrust: Setsuna charges to her opponent and stabs them with a blast of energy from their abdomen with her sword.

Yoshouken: Setsuna summons three faeries that point towards to her opponent from her sword and the faeries spear the opponent for an extensive damage. 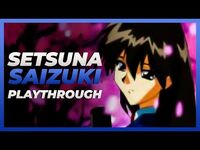